View source
watch 01:25
Jurassic World: Dominion Dominates Fandom Wikis - The Loop
Do you like this video?
Play Sound
This article is a stub. You can help Anodyne Wiki by expanding it. 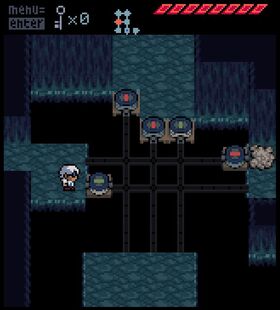 The cliffs dungeon is an unexplored cave in the cliffs area. The area is a bit maze-like and links back to the cliffs area in many places, usually resulting in finding a card or simply to progress to the next area of the cave.

The primary gimmick of the dungeon is a special bellows-like platform that moves when you jump on it, but only once. You can prime one to move again if you pick up some dust with the broom and place the dust on the platform.

Some rooms have giant rolling spike traps that resemble ones seen in Link's Awakening of the Zelda series.

Random male NPCs wander the dungeon in certain rooms, though they can't be interacted with in any way other than to push them around.

The boss of this dungeon is Blue Hand, who rewards you with its card and the Blue Key upon defeat.