This article is a stub. You can help Anodyne Wiki by expanding it. 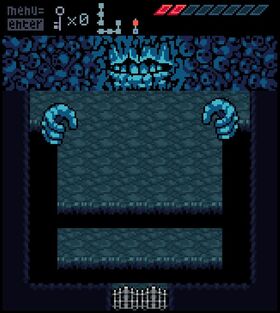 This boss of the cliffs dungeon isn't that difficult to defeat. The big mouth is the target, and can be hit twice before it spits out some poison blobs. While this is going on, the hands will be attempting to smash Young, or break away some of the floor. They may also push Young off the edge. More rarely, they form a beam between them that sweeps up and down the screen, requiring Young to jump the beam several times.

Upon defeat, Young is rewarded with the boss's card, the blue key, and some more cryptic information that things may not be what they seem.